In addition to helping cataracts patients restore clear vision, professionals at Clarity Eye Group are highly trained to perform refractive surgery procedures such as LASIK and PRK to patients in Huntington Beach and the OC area. Refractive errors that occur in the eyes, such as misshapen corneas that blur vision, are relatively common conditions that usually can be corrected through refractive surgery.

Emmetropia is a condition in which the eye, when relaxed, fixes on an object more than 20 feet away. Therefore, an emmetropic eye does not need a corrective lens to focus on so distant an object, because the light rays coming from that distant object are focused on the retina without effort. If the gaze shifts to something closer, light rays from the new source are too different to be focused without effort. In other words, an emmetropic eye is automatically focused on objects in the distance unless an effort is made to focus elsewhere. 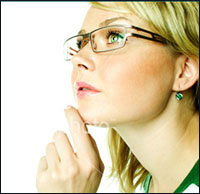 Millions of Americans are myopic, but they probably refer to themselves as nearsighted. Myopic people can see objects that are close to them but have trouble focusing on images that are far away. While myopia is generally mild and manageable, it can be severe and lead to more serious problems and even blindness.

Myopia is generally believed to be an inherited trait in which the cornea is steeply sloped in places, rather than being gently curved as a healthy cornea would be. The condition can usually be easily diagnosed at a routine eye examination.

Myopia can range from moderate to severe, while degenerative myopia is a rarer condition in which the shape of the cornea continues to distort, resulting in worsening vision and severe complications such as thinning of the eye, retinal detachment, macular degeneration, and in some cases cataracts and glaucoma.

Just like myopia, which is more commonly known as being nearsighted, hyperopia is probably better known as the condition of being farsighted. Hyperopia is generally a genetic, inherited trait and results when an eye is too short or a cornea is too flat, so that images focus at a point behind the retina. As a result of one or both of these defects, people with hyperopia can usually see distant objects well, but have trouble focusing on nearby objects.

While people with hyperopia generally can see far-away objects well, those who are moderately or severely farsighted may have trouble seeing objects at any distance. Children with severe farsightedness are more likely to develop strabismus (crossed eyes) or amblyopia (lazy eye).

Because our eyes are often able to compensate for hyperopia, we may not experience any visible symptoms of the condition. Therefore, it is important to have regular eye exams to avoid developing serious problems as a result of hyperopia.

Astigmatism is caused when the cornea is imperfectly shaped. Instead of being evenly curved in all directions, an eye with astigmatism is shaped more like a football. This imperfection causes blurred vision. A person can experience moderate to severe astigmatism depending on how many corneal or lens disturbances are present. Most astigmatism can be corrected through the use of either glasses or contact lenses.

It is a widely held belief among eye experts that everyone is born with some degree of astigmatism, although only the more severe degrees result in vision problems. In other words, no cornea is perfect. But for most people, the degree of astigmatism is so slight that the eyes are able to make up for the misshapen cornea and correct blurry vision without need for eyeglasses or contact lenses. However, people who suffer from moderate to severe astigmatism most likely require corrective lenses or some type of refractive surgery, such as LASIK or PRK, to improve their vision.

Presbyopia occurs over time, as the thin lens of the eye begins to harden and lose its flexibility, making it harder to focus on things that are just an arm’s length away. People with presbyopia may find it difficult to read a book, menu, or newspaper. Because presbyopia typically occurs at or after age 40, it is often called age-related farsightedness.

Monovision treatment is the surgical procedure often used to treat presbyopia. While many people choose to correct their diminishing near vision with bifocal glasses or contact lenses, monovision surgery, including monovision LASIK surgery, is becoming increasingly popular as a method of treating presbyopia.

Monovision LASIK surgery is the newest form of presbyopia treatment. The procedure can effectively and permanently reduce a person’s need for glasses and contacts by correcting one eye for distance vision and the other for near vision.

In monovision LASIK surgery, a small flap is created in the surface of the cornea, the clear front window on the eye, and pulled open so a computer-guided laser can softly reshape the misshapen cornea, allowing the eye to focus better. The flap in the cornea is put back into place after the cornea is reshaped.

It’s reassuring to know that most refractive eye errors are entirely treatable with modern medical procedures. To learn more about refractive error and what the talented Orange County laser eye surgery and cataract doctors at Clarity Eye Group can do to treat them, contact our office today.